Although a lot of people have heard of “handfasting”, most don’t know what it is. So they don’t consider including it in their ceremony. It’s a lovely ritual, and they may be missing out.

Yes, it’s pagan, but if the thought of “pagan” conjures up visions of biting off the heads of live chickens, think again! This is a nature-related ritual, and nobody and nothing gets harmed!

Handfastings date back to the Middle Ages. They were originally a marriage rite, an alternative to the expense of a clergyman. So they were mostly for peasants.

What happened was that a cord was wrapped round the couple’s wrists until their union was consummated. (They would then keep it as a token of their commitment and love.)

Today, the symbolism remains the same. However, there are essentially two types of handfasting. One is the climax of an entire service; the other will just be an element in a ‘normal’ ceremony.

You have free choice of the type of cord you use. I advise one that is at least a metre long (to give me a chance to tie it successfully!). You can choose the colour or type. There are different ways of knotting – I prefer the figure of eight way (representing infinity).

There are no hard-and-fast rules about what goes in to the full service. Your celebrant can advise. Most ceremonies will include the following:

Sanctifying the Circle – symbolises the womb of Mother Earth – we make the wedding site a holy place.

Elemental blessings – these enable us to appreciate how the four elements help us on our journey.

Loving Cup – symbolises drinking in the promises or vows the couples have made.

Handfasting – the symbolic binding of the hands. This inspired the terms “bonds of holy matrimony” and “tying the knot”.

Jumping the Broom – another old custom (probably related to American slave weddings) symbolising the creation of hearth and home together.

Why include the handfasting?

The handfasting words and act are beautiful. They make the ceremony stand out, as the whole ritual is very special. For many people, the connection with nature is highly important. But there’s nothing wrong with simply including something that is different to the norm.

Whatever the reason for including it, you are welcome to discuss it with me. Just give me a call. 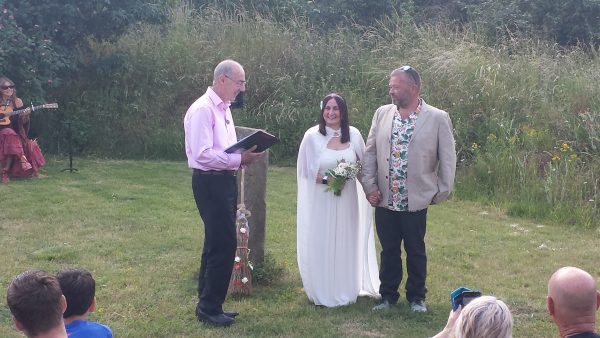 Unless you’re a Pagan, it may have escaped you that today is Beltane. It’s a fire ritual and has some interesting traditions.

Beltane is a fire festival, and originates from the Celtic God ‘Bel’, meaning ‘the bright one’ and the Gaelic word ‘teine’, meaning fire.

Beltane honours life. Taking place on 30th April, it represents the peak of Spring and the beginning of Summer. The theme is fertility.

On the eve of the month of May, the sexuality of life and the earth is at its peak.

The Maiden goddess has reached her fullness. She is the manifestation of growth and renewal. She can be known as Flora, the Goddess of Spring, the May Queen or the May Bride.

The Young Oak King or Jack-in-the-Green or the Green Man falls in love with her and she accepts him.

The May Queen falls pregnant.

The couple are symbols of the Sacred Marriage, the union of Earth and Sky. This is the night of the Greenwood Marriage.

As this is a fire festival, bonfires are lit to honour the sun and encourage the support of Bel and the Sun’s light to prosper the coming harvest and protect the community.

Traditionally, all fires in the community would have to be extinguished. Then a special fire, known as ‘tein-eigen’, or ‘need-fire’ is kindled for Beltane.

,People would jump the fire for cleansing, purification, and fertility. Some couples would jump together (to pledge continuing fidelity) and cattle and other animals would be driven through the smoke as a protection against disease and to bring fertility.

Finally, the villagers would take some of the Tein-eigen to start their own fires again.

As Beltane celebrates the Great Wedding of the Goddess and the God, it is a popular time for pagan weddings or handfastings.

If you would like to find out more about how you can mark Beltane, it’s possibly a little late now! However, if you’d like to consider a handfasting, then please get in touch! 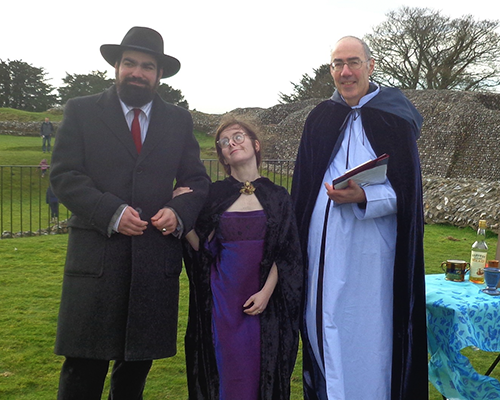 Handfasting – What’s it all about?

So what’s it all about?

I often get asked what a handfasting is.

Do you remember when Prince William married Kate Middleton? Although the ceremony was religious, they briefly incorporated a ritual that resembled a handfasting. The Archbishop draped ribbons over the clasped hands of the couple.

So much else was going on that it attracted little attention. In fact, a handfasting is technically pagan, and can play a central role in pagan ceremonies.

However, it is often chosen as an “add-on” in a more traditional wedding.

A number of brides and grooms are intrigued by this and have decided to incorporate this in their wedding.

Of course, it can be included in a Vow Renewal too.

Handfastings began as a marriage rite in the Middle Ages. When peasants married, they might have been unable to afford a clergyman’s fee to hear their vows or a ring to signify their love. The ritual of handfasting became a popular alternative.

A cord was wrapped round the wrists of the couple and left on until their union was consummated. It would usually be kept as a tangible reminder and proof of their commitment and love.

Nowadays, the cord symbolises the pair’s mutual love. The way a handfasting can be slipped in to a service is as follows. Please note that this is only a suggestion, and it will be rather different for a pagan ceremony.

I conducted a memorable handfasting at an Iron Age Fort in Wiltshire. The ceremony was part-pagan, part-Jewish with rituals from both sides. (Of course, the symbolism was explained as we went along.)

Another example was when I shared a wonderful experience with an American couple at Stonehenge at the time of the solstice – and that was quite unforgettable!

Otherwise, I have performed handfastings indoors, and they were just as satisfying!

To add extra sparkle and personality to your big day, do find out about a handfasting. It will be a pleasure for me to tell you more. 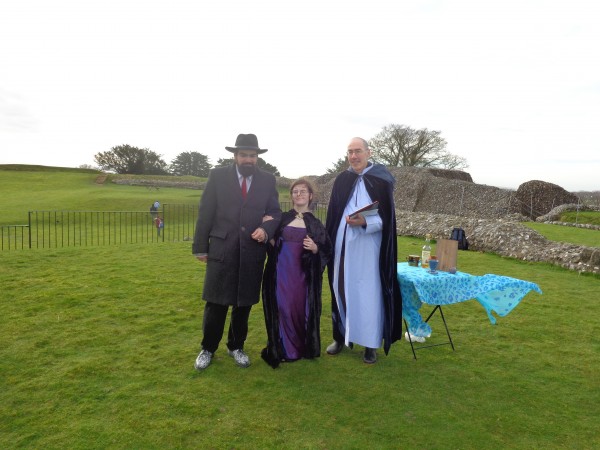