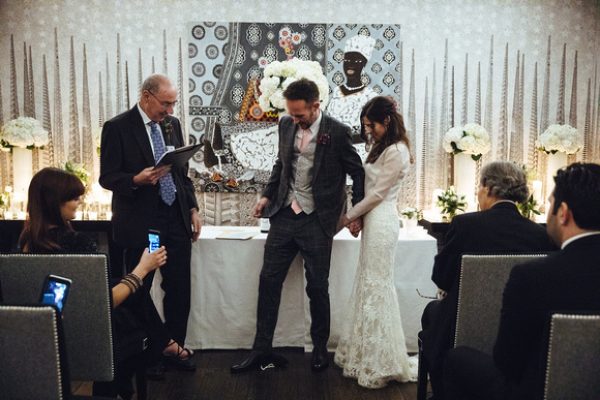 You Can’t Win Them All!

At the end of most of the ceremonies I perform, I receive positive feedback, sometimes very positive indeed. This is most pleasing, because I set out to fulfil dreams, and that can be quite a challenge! So I love to hear that my mission has been accomplished.

However, a ‘win’ is not possible in every single situation.

The preliminary chat that I hold with potential clients is vital. Just as it matters a lot for me, so it can for them.

I had a good discovery Skype call with a lovely couple. We got on very well, although I felt that the groom was a bit subdued.

The couple soon let me know that I wasn’t chosen. I was a little surprised, so I politely e-mailed and asked them if they would tell me the reason.

“I did want to use you, but it’s my fiancé,” the bride-to-be explained. “He wants a razzamatazz wedding, and doesn’t feel that you were right for that.”

I have no arguments with that, as that’s not really where my strengths lie. It just underlined the value of a discovery call or, better, face-to-face meeting.

On one occasion I was discussing options for the forthcoming wedding (also on Skype) with Kayleigh from deepest Essex. In the background I noticed a man hovering a bit, and asked Kayleigh if that was her fiancé. She said that he was.

I invited her to let him join our conversation.

I decided that this was not someone I wished to work with!

Following my home visit to discuss a funeral, the son, Peter wanted “Amazing Grace” sung at the service. This was fine, and it was agreed through the Funeral Director for the music to be played via the speakers and the words to be photocopied by Peter (so he could save a bit of money).

Unfortunately, on the eve of the service, Peter decided to change the version of “Amazing Grace” to Elvis’. The crematorium was advised, but I wasn’t.

Peter handed out the words beforehand, and at the appointed time I announced the hymn. Everyone stood.

That was when we discovered that Elvis’s verses didn’t follow the order on the sheet, and chaos ensued!

Had I been told, I would have checked up on YouTube and been able to prevent that mishap. Oh, well!

On another occasion, I met the family (2 adult daughters and the son) to discuss the arrangements. I took the email addresses of all three to send them the draft funeral service I would prepare. Then they could comment and we could make any changes they requested before the service.

When the son’s e-mail bounced, I e-mailed a sister and explained that I must have mis-heard the e-mail address. Would she forward the draft to her brother, please?

Of course, she would.

It turns out that they were bitter enemies! Luckily, the son contacted me a day or two before the ceremony, and he was still able to contribute his feedback.

We had had a rehearsal, as this was to be a big society wedding in front of 200 guests at the Savoy. On the day, we all knew what we had to do.

I knew that the Best Man, Ollie, would bring up the rings, but, just before we began the ceremony, a small boy – aged about eight – called Alex came up to me. He held a cushion (for the rings) and asked when he should bring them up. I asked if he had the rings, and he said no. I was a bit confused, but realised that Ollie would be doing it and I told Alex not to worry.

At the appointed moment, I called up Ollie, and there was an awful silence. Nobody came forward. I repeated Ollie’s name. The couple didn’t say a word. So it was down to me to say something!

On a hunch, I said that perhaps Alex would save the day – and he duly came up with the rings now nestling in the cushion.

Nobody had thought to inform me that they had made this significant change!

I’m happy to report that, even though not everything went as planned, we managed to achieve a happy result for all concerned despite the hitches. I also think I ought to point out that the vast majority of my ceremonies do go to plan – but that probably doesn’t make such interesting reading!

If you want to know more about putting together an impeccable ceremony (or virtually!), please contact me.