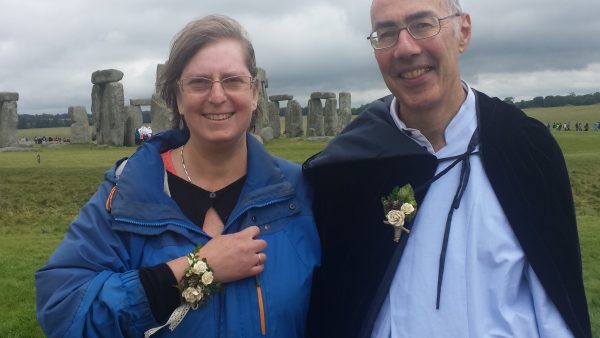 Each to their Own

January is often a depressing time of the year (although potentially exciting). My posts are usually reasonably optimistic, as it is, but I particularly felt that a light-hearted piece was appropriate. What would fit best?

Finally, I opted for an account of a rather strange wedding I recently conducted.

There was already a mystery attached to this wedding before I even arrived. They had asked for a full religious wedding. That’s not an issue in itself, as I do offer religious (or part-religious) ceremonies quite often.

However, this couple were regular church attendees and I made it clear from the outset that I am not ordained. So why would they choose to work with me?

There may have been logistical reasons (maybe the priest wasn’t available). Or else personal reasons (perhaps they disliked the priest). Anyway, it came to the same. I was duly appointed and the build-up went quite smoothly. Everything seemed in hand on the eve of the wedding.

Kick-off was supposed to be 1.30 p.m. (a postponement from 12.45 only the week before). I allowed masses of time, as I had a long stretch of the M25 to cover,so, naturally, there were no traffic problems at all! I actually arrived around 11.45. Not unreasonably, the groom (let’s call him Martin) was not there yet.

Grooms tend to arrive between about 45 and 60 minutes before the ceremony start, so I occupied myself. It appeared that the bride was there (in a room,getting ready), so I knew I was in the right place.

The reception staff told me that the ceremony would be in the library, so I thought I’d familiarise myself with the layout. Not only did the library contain no books, but it didn’t even have bookshelves! Was this the right place?! It did, however, have about 40 decorated chairs (some 20 guests were expected), so I was somewhat reassured.

As the start time drew nearer, nobody appeared at the library. The reception knew nothing of Martin’s whereabouts, although a photographer had now materialised.

Twenty minutes before the ‘off’, it was like a ghost hotel. No groom, no guests, one photographer and an unseen bride. I decided to ring Martin.

Bizarre as I found this, at least I had some sort of explanation, andI told him I’d await him in the library.

Nothing till 1.30 when Martin rang me. He had got lost, but had now arrived. Ten minutes later, still no sign of him. I rang him – he was being photographed!

At this point, a keyboard player and five guests turned up. Next, Martin actually showed up, very apologetic. He went off to get the bride, Winnie. So there was no procession, but, at 2.15, we were all together. Some of the guests were still missing, but Winnie insisted we began.

Five minutes in, no fewer than four photographers burst in, as did two more guests! As you can imagine, it was not the smoothest of ceremonies. To be fair, the couple took it seriously, and the rest of it actually went well. The other guests had opted to skip the ceremony, which I’d say was unusual.

It takes all sorts to make a world. I specialise in personalised ceremonies, so I am not one to criticise, but this was certainly a different approach.

Well, I hope it’s not too late to wish you all the very best for 2019. If you’re planning a ceremony this year, I trust it will be better organised than Martin’s was!

I’d certainly be glad to help you out. 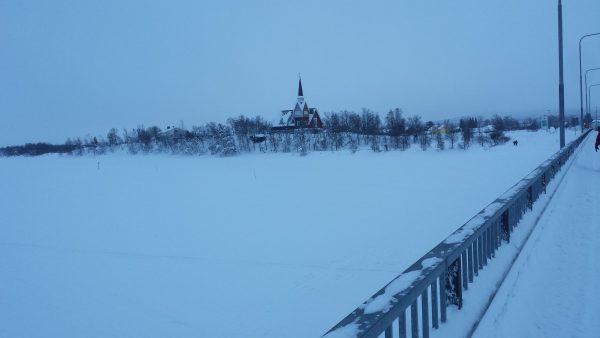 Weddings aren’t always easy. There can be obstacles, some unexpected, others predictable. It’s how you face and overcome them that matters. 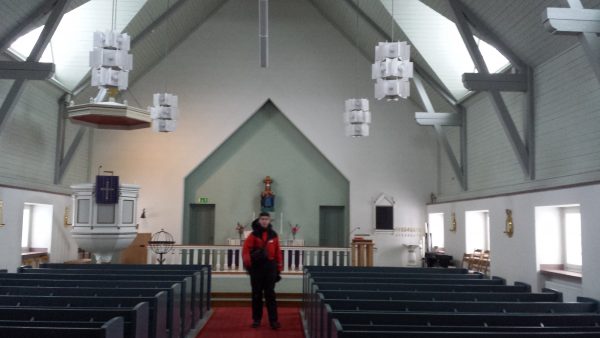 I started thinking like this when on holiday for a few days. We were delving well within the Arctic Circle. The Swedish village we stayed in (Karesuando) had a lovely church (pictured here). So the locals have a viable venue for a wedding (as long as they want a religious ceremony).

But when would be a good time and how would you organise the reception? The main thing to consider would surely be the weather. In February, the time of our visit, the temperature would typically descend to minus 15, and, of course, there was sure to be a metre or more of snow on the ground.

If you choose the summer, there is plenty of daylight. However, we learned that mosquitoes are a major problem. (I mean ‘major’ – apparently, you can’t go out without full netting.)

So when would be the best season for your big day?

There are an issue or two to surmount in Lapland.

Most people, who dwell in less severe climes, have other obstacles to overcome. (Not to overlook the fact that for an outdoor wedding in, say, the UK, the weather issue remains very much to the fore).

For some, the obstacles may be a matter of convenience: can the ceremony and reception be held at the same venue? For others, the primary concern will be balancing the budget. For others again, it may be a question of “Whom do we invite – and whom do we leave out?”

Of course, there’s no definitive answer to any of these, as each will depend on the couple and particular circumstances. I would advise devoting plenty of time, once the budget has been set, to the guest list. (I genuinely forgot to include an elderly aunt at my own wedding, and the fall-out was not insignificant!)

Then there’s the ceremony itself. Will it be conventional or, maybe, unique? Who is going to make the final decision here – the couple or the families?

Is it going to be church?

Is it going to be part-religious – so you can have a civil celebrant conducting a personalised ceremony for you, once the registrars have done the legal bit?

Or perhaps you’ll marry legally at a Register Office, and then hold the ceremony of your dreams in the venue of your dreams. To all intents and purposes, this will be your actual wedding. Again, your civil celebrant will be able to offer you ideas and guidance.

Usually, wedding obstacles are not insurmountable. Often, advice and compromise are sufficient. I’ve helped out quite a number of couples now with mixed-faith issues.

Can I help you too?