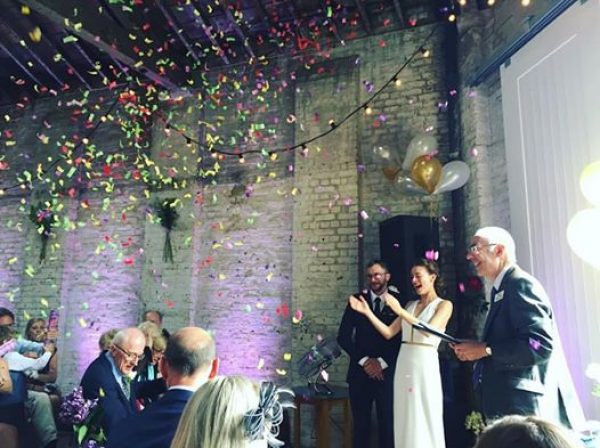 For (nearly) 250 years the US has existed independently of the United Kingdom. That time has witnessed many changes. Language is one example  (“faucet” for “tap”, “diaper” for “nappy”, “sidewalk”  for “pavement” – you name it, the list seems endless).

In some cases with these traditions, it’s only a matter of language too. So the “bachelorette party” is better known in the UK as “hen party” and the “bachelor party” as “stag do”. Furthermore, the “Maid of Honour” is often referred to as “Chief Bridesmaid” over here, and “Groomsmen” as “Ushers”. As a “Civil Celebrant” myself, I have had to become aware of the American version of my job-title, which is “Officiant”.

Other (non-verbal) traditions include no bridal showers in the UK (although they are beginning to catch on, I think).

Invitations can be different. In the UK there may be two types: one, attend everything; the other, just come for the reception. In the US, the invitation will include ceremony and reception.

One significant difference is the processional. At the start, in the UK the bride walks down the aisle followed by her bridesmaids; in the US the bridesmaids precede the bride.

There also tend to be more bridesmaids in the US (on average 5) compared to those in the UK (3).

For the processional, US bridesmaids and groomsmen pair off and enter together; in the UK the ushers are often waiting with the groom.

Often in the UK (but almost never in my ceremonies!) the groom faces the celebrant with his back to the guests; in the US he will face the guests as the bride comes down the aisle.

Another difference at the ceremony is the wedding party. In the US, they stand with the bride and groom during the ceremony, whereas in the UK they sit with the guests.

After the ceremony, there is likely to be a bouquet or garter toss in the US, but not over here. Only in the US can you expect a dance for the parents (formally announced).

Finally, the Americans will include toasts by the bride’s father, maid of honour and Best Man, whereas over here there are normally major speeches by the father of the bride, the groom and the Best Man (and, nowadays, sometimes, by the bride).

Although we have so much still in common with our American “cousins”, a lot, as we can see when we look at the bridal traditions, is different too.

Variety is, as they say, the spice of life.