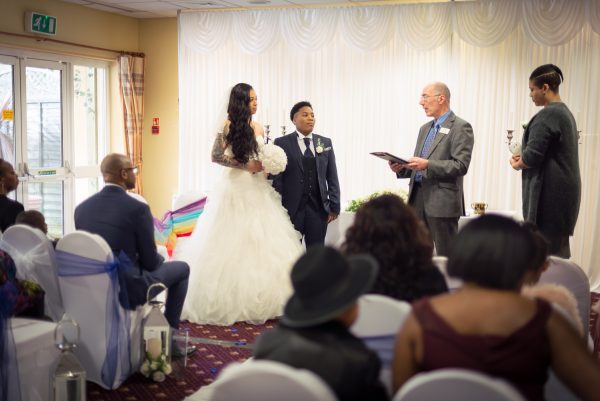 With same-sex weddings legal in England & Wales for some time now, they are becoming increasingly popular. But not with everybody. Indeed, same-sex ceremonies is an area which may provoke major opposition from the family. Let’s therefore take a serious look at this issue.

All weddings face the inevitable question: whom do you invite? Selecting your guests is a tough one to answer at the best of times. You will probably start with close family and friends, but what if your closest relatives oppose your union?

If it looks like relatives will boycott your ceremony, do you go with the flow and simply not invite them? Isn’t it better all round to opt for your friends and (supportive) relations? After all, you’re likely to be spending a huge amount of money on the reception. Why should you have to accommodate people who won’t accept what you’re doing and, at worst, might even turn out to be trouble-makers?

No one would blame you for thinking twice before inviting people openly hostile to your union. On the bright side, they might decline and at least you’ll have gained kudos by having extended the olive branch!

Another advantage from inviting disapproving relatives is that they might, albeit grudgingly, attend and – who knows? – even enjoy a tasteful and personalised ceremony. Wouldn’t that be something if you were able to ‘convert’ them and retain – even develop – a warm relationship with them?!

For many of us, there is the bond of love that unites us with our families. We may not always like our relations, but to upset and potentially do without them for the rest of our lives is something we would do only when all else has failed. Giving them a chance to stay connected with you (even loosely) is surely worth the effort.

If the worst comes to the worst, at least you’ll know you tried. And you stand to gain such a lot, if you can bring those relatives together with you.

Come what may, your ceremony will be a commemoration of love, with promises for the future. It’s not the day to heal rifts, but it may be the pathway to do so, and that is something which should be embraced.

Why should a gay wedding be drastically different to a traditional, heterosexual one? There’s no reason why women should not be in white, and carrying bouquets of lilies. Men can certainly be in suits. The wedding day is the most important day of their lives, and they are entitled to choose to mark it by looking their very best. The affair can be elegant and tasteful – and, in my view, should be.

Gay marriage is legal in most States of the US and is becoming commonplace in the UK too, so let’s become more comfortable with the concept.

In a ‘traditional’ gay wedding, there are some questions to consider: should there be “bridesmaids” – or even whatever the masculine equivalent is? Or a combination of them? And what about surnames? Should either of the pair change their name after marriage? If so, which one? Presumably, that will be down to choice.

There may be some decisions for the officiant: instead of “you may kiss the bride”, the easiest thing would simply be “you may kiss”.

Of course, at present, there’s not really much of a precedent for gay marriages, so the traditions are up for grabs. But do we need to invent any, actually?

To find a civil celebrant for your personalised wedding, look no further than https://vowsthatwow.co.uk/civil-weddings/