No marriage made in heaven

A cautionary tale. It’s about a marriage that was not to be!

In September, I received an e-mail from Ukraine asking if I was available in January to celebrate a London wedding. They had a date, expected guest numbers and a start time – yet, no venue (something I immediately thought odd). Moreover, my correspondent claimed to be called Edward (although his address didn’t quite match this). Furthermore, even though the implication was that he was English-speaking, he clearly wasn’t.

The bride (called “Marry” – more than odd, I thought) was supposed to be his cousin and Edward claimed the couple were English. Anyway, Edward agreed my terms, so I e-mailed my contract for the couple to sign. This was returned with a printed “X” rather than any name. I sent it back and asked for an actual signature, but this was ignored.

I asked for the couple’s details, and I received some. I have not ascertained whether these were genuine. (The address was, as I happen to know, on Kiev’s main avenue. This was the equivalent of London’s Oxford Street, but I guess that people might just live there.)

I told Edward that the payment I received must be net of bank charges or commissions etc. He said he had an uncle over here, who would send me a Sterling cheque, so this would obviate that problem. Promise followed promise, but no cheque came. 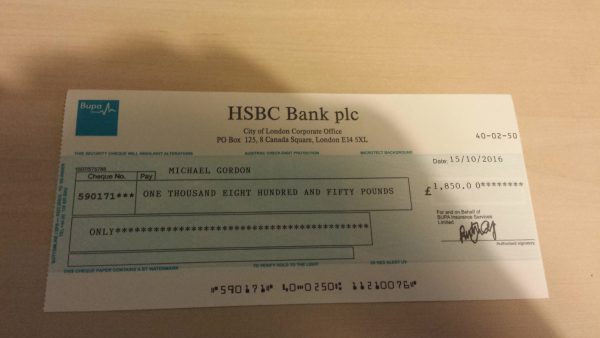 Finally, after about a month had elapsed, another e-mail came through promising me a cheque for £1,850. (Rather more than I charge for a ceremony!) I wrote back at once, telling him I was expecting £300 only (for deposit plus a bit). However, the cheque for £1,850 arrived the next day, mailed from England. Edward e-mailed, saying there had been a mistake and the sum was for me AND the photographer. I should cash the cheque and, when it cleared, pay the photographer, whose details he would send me.

This might just have been plausible, but the cheque was a company one from BUPA (bona fide, I am sure), but signed with a stamp, not a hand-written name.

I suspected that the money had been taken illegally from BUPA. Presumably, the “photographer” I was to pay over £1200 to was actually Edward or an associate.

I shared my opinions with the police Fraud squad, and they told me to ignore all future communication with Edward, and they would share their findings with me in due course (in, at least a month, possibly). I had two dismayed e-mails from Edward, and then nothing since. (I have not heard from the Fraud squad, but am now sure that my suspicions were correct.)

A sad story, and I’m only relieved that things didn’t turn out worse than they did. I wasted time on, and was disappointed in, a potentially valuable order. But who knows what I might have found myself immersed in, had I cashed the cheque and paid the “photographer”!