One of the highlights of a wedding reception is – or should be! – the speeches.

There are normally three of these, offered by the father of the bride, the best man and the groom.

Although he may well have financed much, or all, of the event, the bride’s father will only be expected to make a short speech. He may make some (flattering!) reference to the groom and his family, but his job is really to thank everyone for coming and to invite them to have a wonderful time.

The Best Man has unparalleled knowledge of the groom, and will normally use it to great advantage. He will relate (hopefully!) funny anecdotes that indicate some character traits that not everybody may realise – or, even better, that they do all recognise! The speech should last between about five and ten minutes, depending.

The Best Man (and all speech-makers) should steer clear of politics, insults, bad language and religion. I plan to do another blog on the Best Man’s speech. 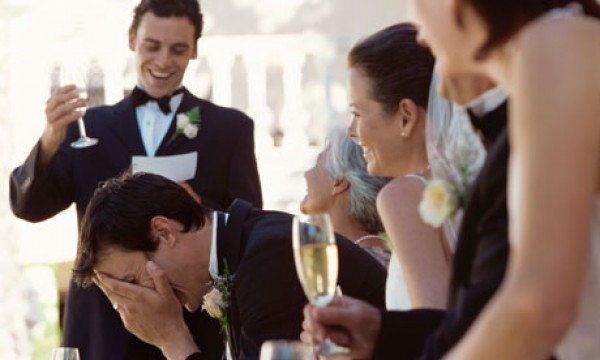 Just as one hopes the Best Man’s speech will shed light on the groom in a witty and entertaining manner, so the Groom has his chance to talk about his new wife. He will alo want to thank people who have made the day possible (including the guests), but he will probably want to demonstrate his affection and express his emotions in some way.

It is vital that the speech is not too long. Ten minutes should be quite enough. It should focus on the bride – what she means to him, possibly how bride and groom met and maybe an anecdote that shows why he chose her. Vitally, it should be sincere.

Of course, the Groom needs to thank everyone who contributed to the wedding (not just financially!). So it will be the parents of the bride, the participants (bridesmaids, ushers, etc.) and the guests. Absent friends may be mentioned here. Without overdoing it, a bit about the best man could go in (preferably, including a story about something he and the Groom both got up to once).

It’s unwise to rely on memory (especially on such a day), but reading out from a long script can be boring. The Groom should use notes, and try and make eye contact with his audience as much as possible.

However, when talking about his new wife, what attracted him, why he loves her, an interesting/humorous episode together, the Groom can address his remarks directly to her. A compliment is unlikely to be taken amiss (and the guests will love it too!).

It’s important to try and vary delivery, so it is not monotonous.

A good tip, however much nerves may be jangling, the Groom should take his time, and avoid mumbling or gabbling. He should speak loudly and clearly. People will really want to hear what he has to say, so it’s not good to frustrate and deprive them!

Starting with a joke is fine. However, the joke must be funny – and not crude or offensive. Rather than telling lame jokes, it may be better to leave them out altogether.

If the groom is determined to tell a joke, it should be directed gently at the best man (NOT at the new in-laws, unless it is definitely appropriate and they will be OK with it! Startting a marriage off on the wrong foot is not advisable…).

I took a great risk at my wedding, because I chose to be quite rude about my new wife. I got away with it (although I am still suffering the fall-out to this day!) because my comments were funny (no, really!), but it’s a dangerous game to play.

When the Groom has done what he set out to achieve, he should stop while he’s ahead. He can propose a toast to the bridesmaids and/or his wife and then pass the microphone to his best man.

Prepare thoroughly beforehand, remember the tips about delivery, and you will make a wonderful speech that you will enjoy making and your guests will love hearing.

Michael Gordon can help prepare and conduct a tailor-made civil ceremony in or around London, or, indeed, Europe.