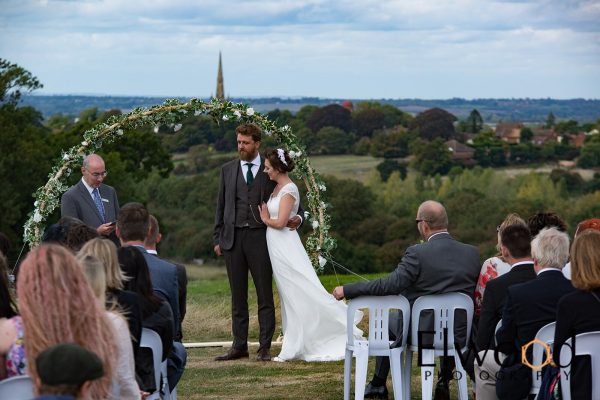 With all the (justified!) obsessive talk about inflation, the short piece in Saturday’s “Money” section of the “Daily Telegraph” may have gone unnoticed. However, the report (with statistics furnished by American Express) contains some horrifying revelations about how much wedding costs have risen since pre-COVID.

Apparently, it used to cost guests an average of £391 in 2019 to attend a wedding. (That’s quite surprising in itself!) Now, they say, this figure has risen to £883. And we’re not talking destination weddings!

It appears that, across the population, £15.6 billion is spent on outgoings such as accommodation, clothes, grooming and travel.

Costs are always going to rise, of course, but it really makes accepting a wedding invitation something to think carefully about. And we aren’t even taking gifts into account!

I don’t think there is much we can do about it. As far as inflation goes, we mostly have to grin and bear it, so the same must go for wedding guest costs. I can’t wave a magic wand (I wish I could!) and resolve things. Mutual awareness, empathy and understanding are important.

Couples will have to consider the circumstances for their guests and be accepting if their guests have to duck out or can’t afford the Maserati that might be on the Wedding List! Just as guests may have to make a sacrifice or two to attend the wedding, so the couple must make sure (without going to extremes) that they show their appreciation to those guests who add so much to the whole affair.

A wedding is still a wonderful, memorable event (especially, with a great celebrant conducting the ceremony!).

But welcome to the new tomorrow! 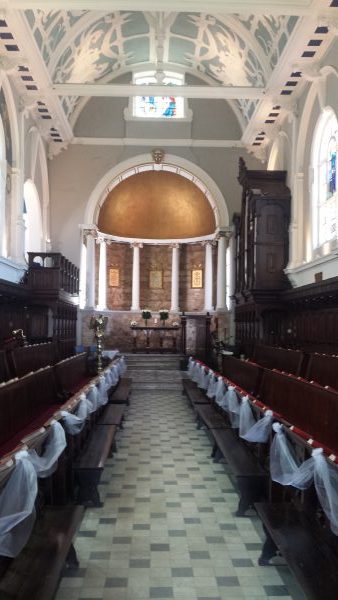 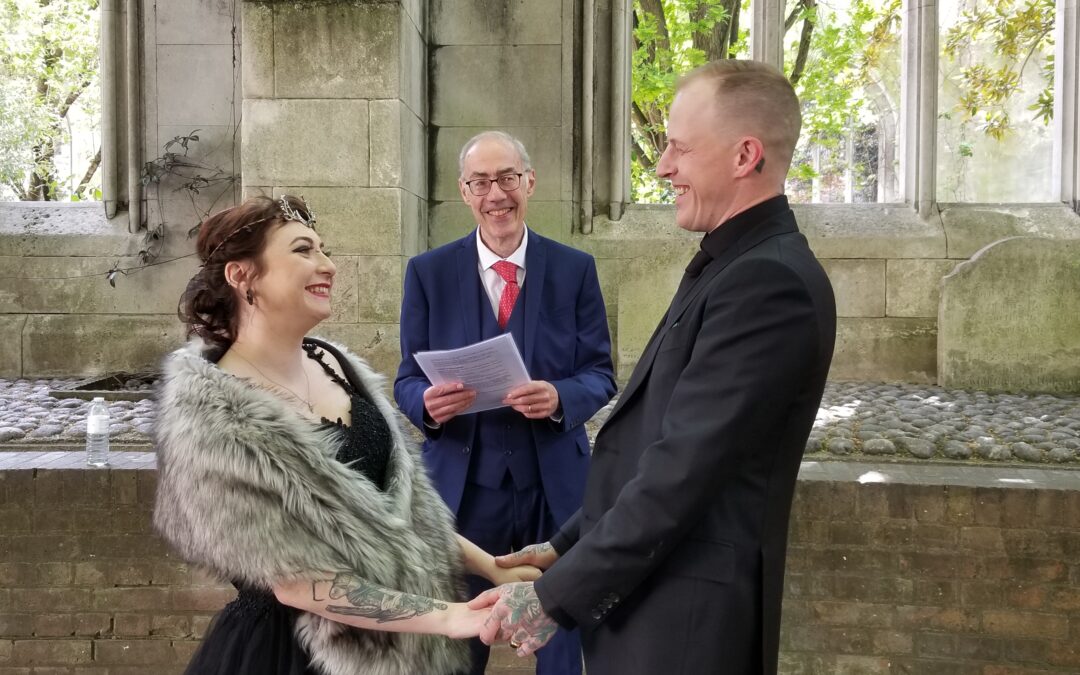 When I performed my first elopement ceremony recently, a number of people were curious. Did this take place in secret? Were there elements that you wouldn’t have expected in a “normal” ceremony?

The circumstances were as follows: Anita and Bruce (not real names!) simply did not want razzamatazz. They definitely dreaded being the centre of attention. They got married officially in the States, where they live, but booked a photographer and myself to conduct what was to be the “real” wedding in London (where nobody else could follow them!).

They wanted a part-religious (spiritual rather than conventional) ceremony, so a celebrant made sense.

We all dressed up (I was a little more conventional!), as the photo shows.

Unusually for London, the weather played along, and it was a beautiful day. Also, the venue was very atmospheric: the lovely ruins of St Dunstans-in-the-East, near Tower Bridge.

The service had been agreed over the months and consisted of the following:

After a short introduction, I read a poem called “Why marriage?”, which seemed appropriate!

I then gave an address about the significance of marriage (not too heavy, though!) before moving on to the Exchange of Vows. Anita and Bruce chose to recite traditional vows, but also wrote their own. After agreeing the basics, they had composed their vows independently, and this was the first time either of them had heard what the other had prepared.

It was predictably moving and very beautiful.

Anita had written more of an essay (!), but what was clear – if it hadn’t already been – was that they were deeply in love and were absolutely serious about their relationship.

We then heard a poem “The Meaning” by Kellie Spehn before moving on to a Handfasting, preceded by an explanation of the ritual. The couple were bound together for a minute or so in an infinity knot.

Then it was time for the ring exchange before we concluded with the Blessings of Divine Qualities and the pronouncement allowing a kiss! (This was certainly the longest I have witnessed!

A round of applause from some (distant) onlookers followed, and we were done!

After a week in London, our couple returned to the States, to commemorate the event with a couple of (small!) receptions.

Their testimonial was heart-warming (“magnificent!”) and made me proud to have ben part of such a joyous but significant occasion. 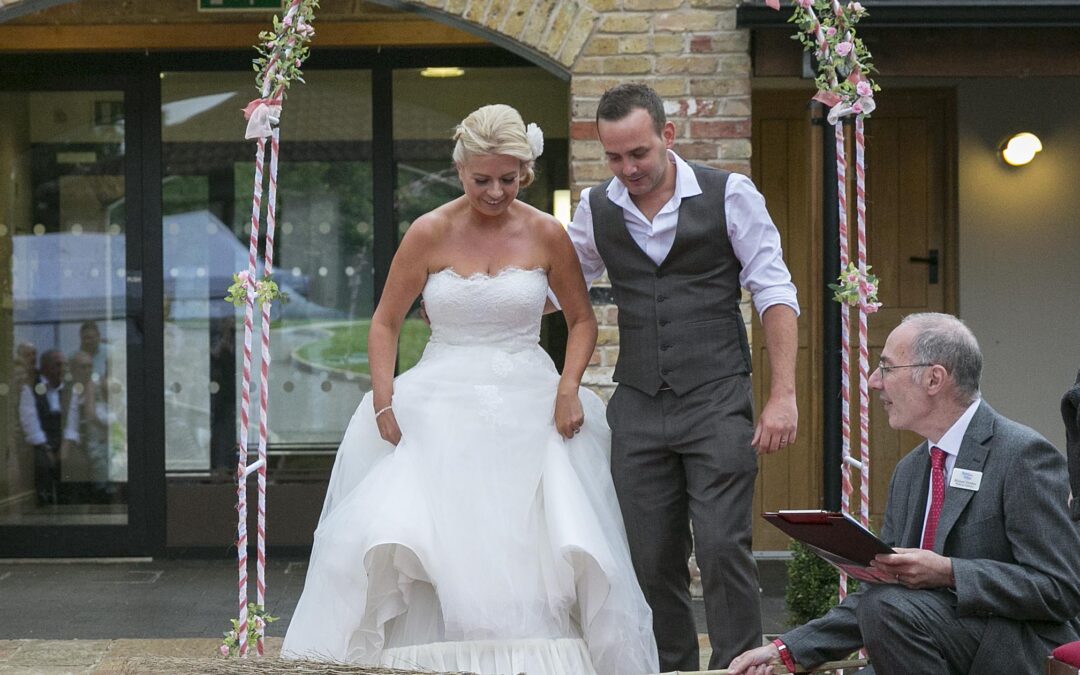 The Value of a Civil Celebrant

Most people don’t really know what a civil celebrant can offer or why they should investigate using one.

A fallacy is that a celebrant is the same as a registrar. Although a proposal to change things so a celebrant’s ceremony can be legal too is going through parliament at present, the roles are still separate.

A registrar is a civil servant, who is employed by the government to ensure that all the legal bits are carried out to make each marriage valid. Their ceremony normally takes a quarter of an hour or so, and is standardised. So each couple gets more or less the same as the one before, or the next one. What’s more, the service may not contain a single religious word or even mention God.

Given that the registrar’s ceremony is mandatory, why should you bother with a celebrant ceremony too?

The fact that the celebrant is independent is worth a great deal. It means that, once you have been legally married (by the registrar), you are free to have the ceremony of your dreams in the place of your dreams.

If you want some religious items, you can do so; if you want to write your own vows, you are welcome to; if you want a mention of absent friends, not an issue; if you want to talk about how the two of you met – or what is keeping you together – then that’s great!

You can have a mix of solemnity and humour. You can have a unique ceremony, maybe including a ritual or two (such as the Loving Cup or a handfasting), and you can tailor your ceremony so that others can participate.

In short, the ceremony can reflect your personalities and beliefs, and be everything you want it to be.

But only with a celebrant.

Of course, there are many celebrants out there, and each has their own USP. So you need to speak to, if not meet, one or two (eliminating some, once you’ve looked at their websites).

Online reviews are a good starting point. Then you can see if the celebrant is likely to understand and run with your vision of the ceremony.

Your budget is not as important as feeling the person is right for you. (You can usually tinker a bit and save some money elsewhere, if the celebrant is a bit dearer than you had planned.)

As well as showing professionalism, albeit in a likeable way, the celebrant should have great presentation skills.

They should be able to create a wonderful personalised ceremony that is beautifully delivered on the day. They need to be able to work hand-in-hand with you to achieve this.

Michael would be glad to have a (non-obligation) call with you to discuss how he can help guide you to your dream ceremony. 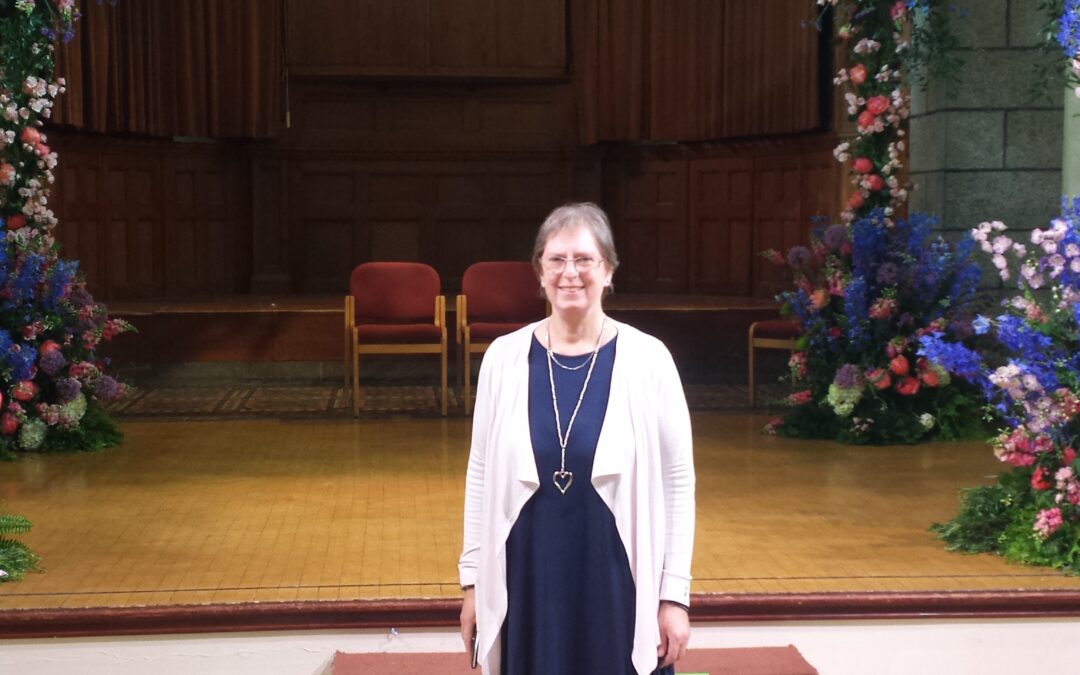 How to personalise your Ceremony

Nowadays, fewer people are choosing a full religious service to mark their marriage. But the Register Office ceremony can be uninspiring, both regarding content and delivery.

These specialise in letting their clients choose what they are going to include in their service (and exclude!).

So how can you personalise your ceremony?

You can choose (as long as you can afford it!) the venue that really hits the mark for you. It may be quirky (like a pod on the London Eye, an aquarium, or an old favourite like a castle or a hotel). It can be outdoors (if you gamble on our climate!) or indoors. It can be grand, modest or somewhere in between.

What you choose will reflect your personalities.

You can individualise your wedding décor. This may include invitations, signage and seating plans. You can commission this, or do it yourself (given the time and creativity).

As well as beautifying things, flowers too will reflect your personalities. They may, or may not, be seasonal, exotic, simple, ravishing, or your own themed colour(s).

The flowers can extend beyond the bridal bouquet to table and room decoration (as in the photo) and even arches.

These days, you may not choose to wear the traditional clothes. So a bride might shun white, or even a dress. The groom may prefer to dispense with a tie. You can still look original and fetching, and declare your personality.

There are lots of ways to personalise the ceremony itself. You may go for a ritual (what about a handfasting?) or a recital of how the two of you got together and/or why you stayed together! You may want to write your own vows. And so on.

Your civil celebrant should be able to help you with all this, and positively channel your affection, humour and potential emotion.

So the whole service can reflect your personalities and beliefs and be very, very special.

I’d love to be of help to you constructing this. Just contact me!